A Knockout for Playscape! 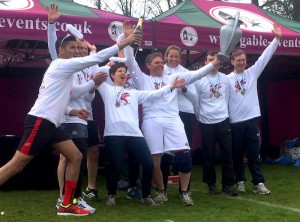 Congratulations to The Saints team, who ran, bounced, catapulted and waddled their way (complete with fluffy halos) to lift the inflatable Trophy at Playscape’s It’s a Knockout competition in April!

It was a grand slam from this group of St Faith’s parents, as they also won the prize for the most enthusiastic participant (Niel Kang, the one wielding the bubbly) and top fundraiser (Captain Annalise Cross, a whopping £1500!). 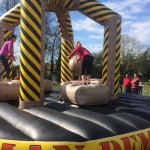 300 spectators cheered on the eight intrepid teams (as well as ate cake and burgers!) and there was a wonderful sense of community amongst the assembled crowd. A brilliant, if rather chilly, afternoon, there was plenty of talk of rematches before the day was out.

But this wasn’t just an excuse for a laugh down on the rec, oh no, we’re in the serious business of raising funds for a new playscape.

And we’re delighted to announce that we’ve raised a fantastic £12,000 towards the playscape appeal! 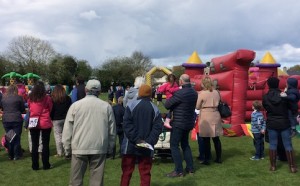 So a HUGE THANK YOU to all the amazing teams who took part and sought sponsorship, to TTP Group who sponsored the event and match funded their team’s donations, for the volunteer bakers who produced a delicious array of cakes, the WI who ran the café, the volunteer face painters who did a marathon non-stop session, to those who lent us the BBQs and to all the spectators! Thank you, thank you!

Donations for this event have now closed, however you can donate to the charity at any time here. 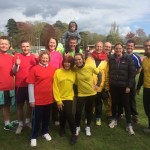 Wishing you’d had a go at “human demolition” or “ski crazy” now? Well the next exciting event will be in the autumn: sponsored abseiling down St Mary’s Church Tower! This will also be open to anyone over 10. Registration will be via our website shortly, however in the meantime if you’d like to reserve your spot then please just drop an email to Jenny at events@shelfordplayscape.org.